From BoxRec
(Redirected from Joe Frazier vs. Oscar Natalio Bonavena)
Jump to navigation Jump to search 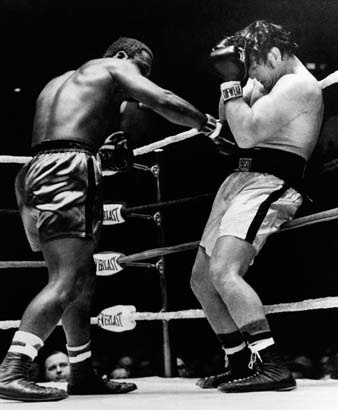 Undefeated Joe Frazier retained his share of the world heavyweight title by hammering and chopping his way to a lopsided decision over awkward but bull strong Oscar Bonavena of Argentina in a foul-packed 15-rounder at the Spectrum Tuesday night. The 3-1 favored Philadelphian hit the 26-year-old South American with everything he had throughout the scrap but couldn't drop the strong-jawed, bloodied challenger who went the limit with Frazier for the second time. Frazier, 203 pounds to Bonavena's 207, opened cuts over both of Bonavena's eyes, on the bridge of his nose and raised lumps on Oscar's face with his relentless pounding. ... Bonavena, fighting most of the way with his back to the ropes and his hands held high in a peek-a-boo defense, absorbed a fierce pounding to the head and body as he apparently waited to get home one big bomb. He never came close. The clumsy, muscular Argentine was warned for low blows in four rounds—the third, eighth, 10th and 12th, and he lost the eighth by penalty from the referee. ... The flat-footed challenger fought back only in flurries until late in the fight. He kept trying to nail Joe with a big punch but he was wild most of the time and when he did land a good punch, it didn't seem to bother the champion. - Associated Press