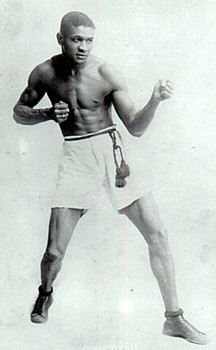 According to the U.S. Census Records database on the Ancestry.com website, one "Arphelies" Hicks, a 23-year-old native of Pennsylvania, was living with his wife, "Mattie," and a boarder, Vamanda Cobb, in Allentown, Pennsylvania during 1920. All three members of the household were listed as mulattoes while "Arphelies" was listed as a "Prize fighter."

The U.S. World War II Draft Registration Records database on Ancestry.com record one Arphelius Hicks, 45, who was born on May 6, 1896 in Norfolk, Virginia. At the time, he was working as a "rivetheater" at the Brooklyn Navy Yard and was living in Brooklyn, New York.

According to the U.S. National Cemetery Internment Control Forms database on Ancestry.com, one Arphelius Hicks was born on May 6, 1896 in Virginia and died on August 12, 1953. He enlisted on April 27, 1918 in the U.S. Army, served in the 92nd Division (a segregated unit of African American soldiers) and was discharged as a private first-class on February 27, 1919. His widow was Alma E. Hicks, who wanted to be interred in the same grave as her husband.