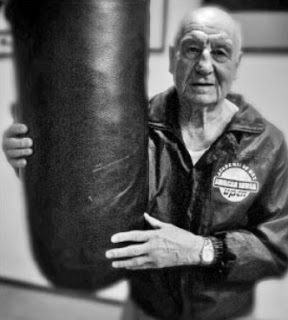 Amílcar Brusa (October 23, 1922 - October 27, 2011) was an Argentinian boxing trainer, who is widely considered to be Argentina and South America's foremost boxing trainer. He began training boxers in his native Santa Fe, in 1950, discovering his first world champion in 1963 when Carlos Monzon asked him to be his trainer. Brusa would guide Monzon to the World Middleweight title in 1970. He had since trained many top Argentinian fighters, as well boxers from other South American countries. In 2003, he was hired by Golden Boy Promotions, as their head trainer and technical advisor. He was working out of the La Brea Boxing Academy in Los Angeles.