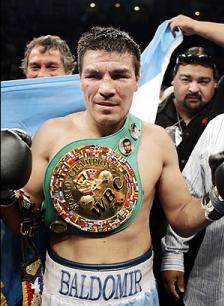 
On January 7, 2006, won the WBC welterweight title with a shocking unanimous decision upset victory over the heavily favored and reigning undisputed champ, Zab Judah, at Madison Square Garden. Baldomir only paid the sanctioning fees for the WBC title, so Judah's WBA title was given to co-champion Luis Collazo, while the IBF remained with Judah. Baldomir's team subsequently claimed that the IBF and WBA, never approached Baldomir about paying their sanctioning fees. In his first defense of his title on July 22, 2006, Baldomir stopped Arturo Gatti in the 9th round in Atlantic City. On November 4, 2006 Baldomir was defeated by Floyd Mayweather Jr. on a lopsided unanimous decision.