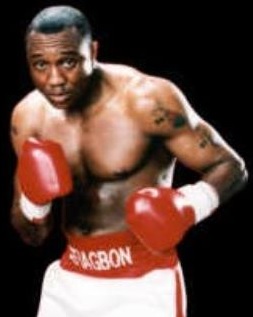 
Defiagbon was an accomplished Nigerian and Canadian amateur boxer, winning approximately 180 matches with only 20 defeats. Defiagbon was a Nigerian champion and won the Commonwealth Games in 1990. He competed for Nigeria in the 1992 Olympic Games in Barcelona, losing in the first round of the light middleweight division to future pro world champion Raul Marquez.

Defiagbon fled his native Nigeria in 1992 for what he calls "political" reasons. He went to Canada and obtained Canadian citizenship ...he won the Canadian heavyweight title in 1996. He finished first at the America´s Olympic Trials in 1996 in San Juan, Puerto Rico.

In the Atlanta Olympic Games in 1996, Defiagbon, now up at heavyweight, had his hand raised in victory after a victory by disqualification, assuring him of at least a bronze medal.

An apparent low blow thrown by Christophe Mendy of France in the third round sent Defiagbon reeling to the canvas in severe pain. And after a doctor examined Defiagbon in the ring and took the Canadian's word that he couldn't continue, Mendy was disqualified. The fight was stopped. Referee Abduk Samad disqualified Mendy and the Canadian advanced in the heavyweight division. In semi-final, he won over Nate Jones (USA) 16-10. He took the silver medal losing a clear decision 2-20 to Felix Savon of Cuba in the final.

Represented Nigeria at the 1992 Summer Olympics in Barcelona, Spain, boxing as a Light Middleweight (71 kg).

Represented Canada at the 1996 Summer Olympics in Atlanta, United States, boxing as a Heavyweight (91 kg).