From BoxRec
(Redirected from Fight:1157129)
Jump to navigation Jump to search 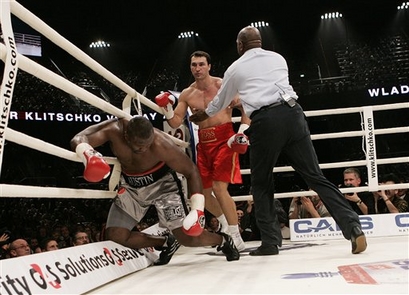 MANNHEIM, Germany -- Wladimir Klitschko successfully defended his IBF heavyweight title Saturday night, dropping Ray Austin with a flurry of left hooks and stopping the American challenger in the second round.

The Ukrainian knocked down Austin 87 seconds into the round with at least three left hooks. The American climbed to his feet, but referee Eddie Cotton stopped the fight.

"I was surprised he got back up, but he wasn't clear in the head," Klitschko said. "I was motivated by the talk from Austin and his promoter, Don King, before the fight."

Klitschko improved to 48-3 with his 43rd knockout in the mandatory defense; Austin fell to 24-4 with four draws and 16 knockouts.

Neither Austin nor King, both of whom had called Klitschko heartless before the bout, showed up at the postfight news conference.

Klitschko established himself among the best of the heavyweight division with wins over Samuel Peter of Nigeria, Chris Byrd and Calvin Brock.

Both fighters were listed at 6-foot-6 and 246 pounds, with Austin's camp hoping another big heavyweight would trouble Klitschko.

But Austin didn't land a meaningful blow in the first round.

Klitschko measured Austin with his left hand until he caught him on the ropes. The Ukrainian snapped Austin's head sideways with the first left hook, and then followed with a series of hooks, some missing as the American fell to the canvas.

Klitschko never used his right hand that was responsible for most of his knockouts and earned him the nickname Dr. Steelhammer.

"What you saw today, you're going to more of the future -- Wladimir is developing new punches, besides the right and the jab," trainer Emanuel Steward said.

The crowd of 15,000 roared for Klitschko went he walked in, then jeered a fight that featured just a handful of punches.

Austin had been stopped just once before in his four losses, in the ninth round, by Attila Levin in July 2001. It also was his last loss.

The 30-year-old Klitschko won the title in April, stopping Byrd in the seventh. Next up, his camp hopes, is a unification fight against WBA champion Nikolai Valuev, the 7-foot Russian.

"Valuev wants it and I want it," Klitschko said. "But you can imagine how hard it is to deal with Don King."

Austin earned the title shot with a draw in July against unbeaten Russian Sultan Ibragimov.

The bout was televised in more than a hundred countries. Former world champions Lennox Lewis and Vitali Klitschko made short guest appearances in the ring.