From BoxRec
(Redirected from Fight:26935)
Jump to navigation Jump to search 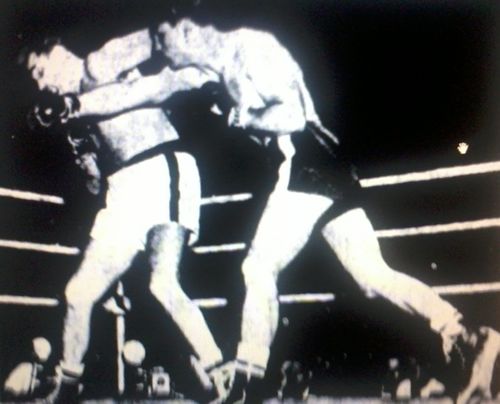 Pastrano throws a right at Maxim.

From The Associated Press:

The 19-year-old Pastrano, a product of the French Quarter which gave one-time bantamweight king Pete Herman, the Docusen brothers—Bernie and Maxie—and top-ranked lightweight Ralph Dupas to the ring, scored a unanimous decision over the one-time light heavy king from Cleveland last night before 6,500 fans.

Pastrano is unranked among challengers for Archie Moore's title, but Nat Fleischer, editor of the Ring Magazine, was a spectator and said he is convinced the New Orleans stylist belongs in the division's top ten. Fleischer said Pastrano would be ranked in the first division in the next edition of the Ring.

Pastrano weighed in at a surprisingly heavy 176 to offset Maxim's 182. Pastrano paced himself well through the early rounds and piled up a substantial margin, proving a tough target for the former titleholder.

The three officials were in accord on the decision. Judge Lucicn Jaubert and Francis Kercheval both tabbed it 5-4-1 for Pastrano while Referee Eddie (Kid) Wolfe gave Pastrano six rounds, Maxim three and called one even. The AP card also had Pastrano the winner 6-3-1.

After a slow opening round, Pastrano opened up, circling the ring-wise Maxim constantly and scoring with combinations to the head and body. Maxim relentlessly pursued Pastiano in an effort to get in close quarters, but Pastrano quickly moved back to long distance where he proved superior.