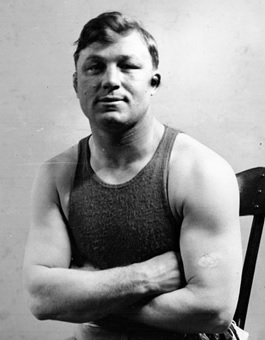 Fireman Jim Flynn's real name was also reported as being Andrew Chariglione. He emerged from the railroad yards of Pueblo, Colorado, to gain fame in the ring--eventually challenging reigning champion Tommy Burns in 1906 for the World Heavyweight Title, and again in 1912 against then champ Jack Johnson. In 1917 he became the first and only man to KO future champ Jack Dempsey.