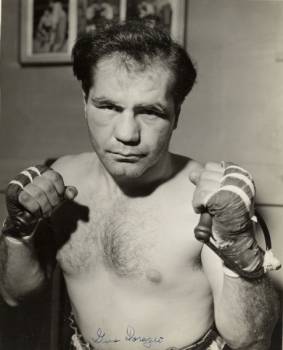 On Jan. 10, 1949, Gus Dorazio was arraigned on a charge of homicide, in the fatal beating of a brewery worker. He was accused of murder by fist, after Albert Blomeyer died of injuries suffered in a fight the previous Friday. Detective Martin Curran testified that the fatal beating may have grown out of a union dispute. Both Blomeyer and Dorazio were employed at the C. Schmidt & Sons, Inc., brewery. Blomeyer was a shop steward for the C.I.O. brewery union. The detective testified that Blomeyer had received instructions to circulate a petition seeking a union shop at the plant which had been torn by union strife for several years. Dorazio claimed that Blomeyer and two others had "ganged up" on him, and resented recent taunts that he was "punch drunk." Dorazio earlier had served a prison term as a draft dodger. Associated Press.