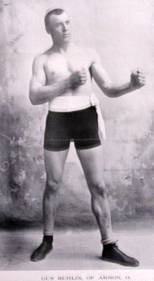 Gus Ruhlin was only 40 years old when he died of a massive stroke at his home February 13, 1912 in Brooklyn, New York. He and his wife had run a local café, popular with current and former fighters.

Ruhlin had been a champion of women's suffrage. [1]