From BoxRec
(Redirected from Human:12063)
Jump to navigation Jump to search 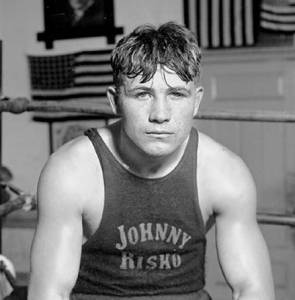 Heavyweight boxer. Turned pro in 1925. In his fourth professional bout injured his right shoulder, and from then on counted on his aggressive style, competitiveness, and devastating left hook to win fights. He was nicknamed "Cleveland's rubber man" because of his ability to absorb opponents' blows. Risko fought Gene Tunney in Cleveland on November 18, 1925, losing a close 12-round decision. He defeated both Jack Sharkey and Max Baer. Only Max Schmeling knocked him out in 1929.