From BoxRec
(Redirected from Human:12071)
Jump to navigation Jump to search He and future World Champion Jack Sharkey had served in the United States Navy together, aboard the U. S. S. Denver. Schaaf became the U. S. Navy Heavyweight Champion, and was nicknamed "The Tiger of the Sea." His early manager was Phil Schlossberg, also a former USN heavyweight champion, who guided Schaaf until he sold his managerial contract around 1929 or 1930 for $7,500 to Sharkey and Johnny Buckley, Sharkey's manager. (Some say it was for $12,500.)

Schaaf trained in the gym of Jerry Buckley, brother of Johnny. He moved his headquarters to Boston, which was also the hometown of Sharkey, Schaaf's idol. Around this time Schaaf posed for the bronze Gene Tunney--William Muldoon Trophy--which was established by Tunney shortly before his retirement in 1928, and inscribed with the names of every heavyweight champion from John L. Sullivan to the current champ.

After every ring victory Schaaf would send his mother, Lucy, rose carnations. He became a Top 10 contender by the end of 1930. 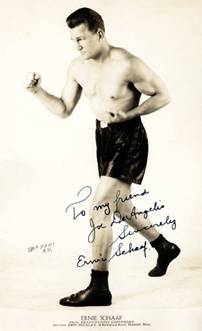 It was Schaaf's intent to go into the Catholic priesthood upon retiring from boxing. He often attended St. Mary's Catholic Church and the Passionist Monastery in Brighton.

His mother was with him when he died from injuries sustained during about with Primo Carnera.
"Honey, are you my sweetheart?" she pleaded at his bedside, contemporary newspapers reported.
"Yes, mom," he whispered, as he awoke briefly from his coma.
"How are you?" she asked.
"I'm okey, Mom."
He slipped back into a coma and never regained consciousness, and died.

He received a firing squad salute from sailors of the Boston navy yard. Sharkey, the Buckley brothers, Sclossberg, Madison Square Garden matchmaker James J. Johnston, John J. Phelan of the NYSAC, Boston Red Sox baseball President Bob Quinn, boxers Jimmy Maloney, Jose Santa, Sammy Fuller, Al Mello and Lou Brouillard, and many others attended the funeral services, conducted by the Rev. Remi B. Scheuver. (Photo of Services) Carnera had sent a $150 cross--six feet high and four feet across-- adorned with roses, orchids, lillies and volets, bearing a satin ribbon inscribed "with the deepest of sympathy--Primo Carnera." His grave was covered by a blanket of rose carnations from his grieving mother. He is buried in St. Mary's Cemetery, Foxboro, Massachusetts. (According to later cemetery records, Schaaf's body was exhumed and moved by his family to some unknown place.)

Some of this information is courtesy of James A. Merolla's Feb. 14, 2003 Sun Chronicle article.