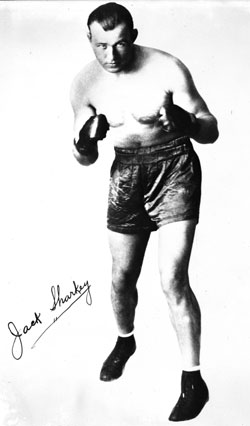 A fast and well-schooled fighter with no lack of heart and determination, Jack Sharkey is nonetheless overshadowed by the other heavyweight champions of his era. Sharkey?s indefatigable willingness to fight any opponent is best illustrated by his distinction in being the only man to have faced both Jack Dempsey and Joe Louis in prizefights. Though he consistently fought the best, Jack did not always win when up against the true upper crust of the division. In fact, his finest performances are perhaps his losses to Dempsey and Max Schmeling. Outspoken about his own confidence in his abilities and often surly or uncooperative in business, Jack had the talent to back up his ego. He remained a constant presence at or near the top of the heavyweight division for nearly a decade and solidified in his place in boxing lore by becoming heavyweight champion.

Born Joseph Paul Zukauskas, the son of Lithuanian immigrants, Sharkey was born in Binghamton, New York but moved to Boston, Massachusetts as a young man. Sources report little of his early life until, at the outset of the First World War, teenaged Joseph repeatedly tried to enlist in the Navy. Turned down because of his age, he was not able to enlist until after the end of the war. It was during his tenure in the Navy that he first showed interest in boxing. Tall and husky for a man of his generation, Joseph (or ?Big Skee? as he was nicknamed at the time) was encouraged by his friends in the service to box. He quickly established notoriety as the best boxer aboard any vessel on which he served. During his brief returns home to Boston he took part in his first fights for pay, the first taking place on January 24, 1924 against one Billy Muldoon, who was dispatched inside of a round. By the time of his honorable discharge just short of a month later, he had won a second fight and was already earning write ups in the Boston papers.

Having found himself a manager and now focused entirely on his career as a prizefighter, young Zukauskus decided to adopt a more publicity-friendly stage name. He decided upon Jack Sharkey, combining the names of two of his idols, heavyweight boxing icons Jack Dempsey and Tom Sharkey. Jack met with moderate success in his first two years of fighting mainly in the Boston area. Though he did not always win his early bouts, he routinely fought reputable opponents with vast experience advantages over him. As a result, his technique improved quickly, as was displayed in his 1926 New York City debut, fought at no less a venue than Madison Square Garden. His opponent, Eddie Huffman, was no contender but was still a favorite over the Bostonian. The unknown Sharkey boxed well enough over ten rounds to take the decision and earn notice in fight circles as an up-and-coming heavyweight. Five follow-up wins led to a match with future hall of famer Harry Wills, who was considered at the time to be the fighter all of the top heavyweights made a point to avoid. To the surprise of many, Sharkey clearly outboxed the veteran Wills who retaliated with an illegal backhand blow that got him disqualified in the thirteenth round. It was Wills? first defeat in four years and Jack Sharkey was now a major contender for Gene Tunney?s heavyweight championship.

To start off 1927, Jack stopped former light heavyweight champ Mike McTigue in twelve rounds and then Boston rival Jim Maloney in five. Then it was on to a match with his own idol, former champion Jack Dempsey. The winner was scheduled to meet Tunney for the title. On July 21, 1927 at Yankee Stadium in New York, Sharkey proved too fast and too hungry for the aging and rusty Manassa Mauler. He clearly outboxed Dempsey and was amassing a wide points lead going into the seventh round when, believing himself to have been fowled by a low blow from Dempsey, Jack turned to the referee to complain. At the very moment, Dempsey landed a classic left hook directly to Sharkey?s chin. Sharkey, who had dropped his guard when complaining to the referee, immediately fell forward onto the canvas and was counted out while clutching his groin and moaning in agony. Though Dempsey supporters rallied around the technicality that a fighter should protect himself at all times, many who left that night felt that Sharkey had proven himself Dempsey?s master, loss or no.

It was no wonder then that, over the next couple of years, Sharkey continued to be respected as one of the most consistent performers in the division. He held future title challenger Tom Heeney to a twelve round draw, dropped a decision to highly regarded Johnny Risko, and then rebounded with seven consecutive wins against impressive competition. In 1929 he proved especially successful, beating both Young Stribling and Tommy Loughran, two future hall of famers who had a combined 296 wins to their credit when Jack fought them. Thus, after Tunney retired, Sharkey was a shoe-in to fight for the vacated world championship. His opponent would be Germany?s Max Schmeling, a little-known counter puncher whose record lacked the big names evident on Sharkey?s. On June 12, 1930, in his first fight for the title, Jack again exhibited terrific boxing ability and appeared to have control of the fight going into the fourth round. In that round, he landed what appeared to be a low blow on Schmeling, who fell to his knees howling that he had been fouled. When Schmeling?s manager broke into the ring, chaos ensued and the panicked referee disqualified Sharkey.

Still determined to prove himself in the best in the world, Sharkey next took on Mickey Walker, the popular brawler and former two-division champion who was moving up in weight in hopes of winning the heavyweight title. In an admittedly close fight in which Sharkey scored the only knockdown, the judges ruled the fight a draw. Then he moved from having a considerable size advantage against Walker to being at a decided size disadvantage against Italy?s Primo Carnera on October 12, 1931. Carnera stood over six and a half feet tall and weighed two hundred and sixty one pounds, but had none of the technique of a clever boxer like Sharkey. Jack boxed rings around the ?Ambling Alp,? scored a knockdown in the fourth, walked away with a decision after fifteen rounds, and earned himself a second shot at Schmeling.

Max Schmeling was still the heavyweight champion of the world when the pair fought their rematch at Madison Square Garden on June 21, 1932. This time Sharkey emerged the victor and new champion, winning a fifteen round split decision. But again success came with bitterness. Many in the crowd felt that Schmeling had gotten the better of the action and the Garden echoed with chants of ?robbery.? Plans for a rematch were ruined when Schmeling lost his 1933 fight to big, hard-hitting Max Baer. So the new champion, supposedly under pressure from mob figures, decided to face Primo Carnera once more on June 29, 1933. Though he again proved Primo?s superior in speed and skill, Jack was rendered unconscious by a huge right uppercut directly below his jaw in the sixth round. Afterward, the press surged with accusations about Sharkey taking a dive, though the man himself denied such rumors to his dying day.

After incurring two more losses before the close of 1933, Sharkey was considered by many to be a shot fighter. He took an entire year off before returning in 1935. In his next four fights, all against mediocre opposition, Sharkey could only manage two wins. He was then placed in the ring as a name opponent for up-and-coming sensation Joe Louis on August 18, 1936. Floored four times inside of three rounds before suffering a knockout, Jack never fought professionally again. In retirement, he owned a bar, often worked as a referee, and often earned money from various personal appearances. He died on August 17, 1994 at the age of 91, just months after his induction into the International Boxing Hall of Fame.