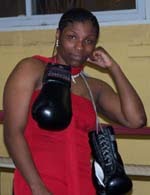 Amateur career
Robinson was born in Chicago, Illinois in 1980. She began boxing at age 14 to survive in Cabrini Green public housing projects. She was involved with numerous street fights growing up, and would often beat up large men in these encounters. Robinson won her first Golden Gloves competition in 1995. She repeated the performance in 1996, 1997 and 1998, also winning the 1996 Citywide Tournament in Chicago. On May 31, 1998 in the 156-lb final of the USA Boxing/Everlast National Senior Championships in Anaheim, California, Robinson lost to Evelyn Rodriquez of New York by a 10-2 score. This would be Robinson's only defeat as an amateur boxer. On April 15, 2000 in the 165-lb final of the USA Boxing/Everlast National Championships in Midland, Texas, Robinson stopped Eva Longoria at 0:51 in the opening round. On May 7, 2000 in the 75-kg final of the prestigious Feenix Box Cup international tournament in Turku, Finland, Robinson defeated Canadian champion Jennyfer Grenon by a 5-4 margin. On August 12, 2000 in the 165-lb Open Division Final of the 2000 US National/International Golden Gloves in Augusta, Georgia, Robinson won by a 5-0 decision over Angela Josipovic of Toronto, Canada. Robinson's amateur boxing career ended with a 37-1 record.
* Amateur history