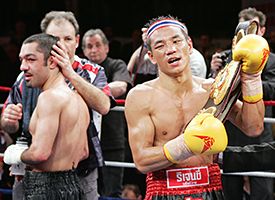 A left hook at :14 of the opening round clipped Monshipour on the chin as the two exchanged and sent him down. He was up almost immediately and action continued. A left uppercut at :36 sent Monshipour stumbling backward and down again for the second time in the round. He was up at the count of two. In Round 2, a small cut opened on the outside of Monshipour's left eyebrow that was handled well by the corner and never noticeably bled during the fight. Monshipour threw almost non-stop and landed frequently in Round 3 with Sithchatchawal against the ropes. Sithchatchawal looked to slip punches and catch his opponent unguarded. Monshipour went to the mat in the opening seconds of Round 4, the result of a push. The two moved around the ring more in the round with Monshipour's output dropping only slightly. He landed six consecutive shots in the round as Sithchatchawal tried to duck and slip the shots. Sithchatchawal too had success in the round as he threw less but landed some sharp punches in between his opponent's attack. Sithchatchawal turned his focus to throwing to the body in Round 5 and backed Monshipour up with a left hook at 1:30 of the round. A follow-up left hook to the body again sent Monshipour backward. Monshipour, still not wholly steady, retaliated by coming forward and landing around ten unanswered power shots to Sithchatchawal's head. In Round 6, Sithchatchawal likely earned the round landing on the inside as Monshipour, despite his legs not being fully under him, still kept the pressure on. Monshipour began to bleed slightly from the nose and from a cut lip in Round 7. Sithchatchawal was warned in the 7th to keep his punches up as a couple from his body attack strayed along the belt line. In Round 8, Sitchchatchawal looked to step away from Monshipour's pressure and make him pay coming forward. Despite having lost some steam from his punches and "arm punching" at times, the champion continued to press forward and throw. Sitchchatchawal landed numerous heavy shots to the head in the opening half of Round 9 and it appeared Monshipour could be in danger. Monshipour responded, however, by coming forward, getting Sitchchatchawal against the ropes, and throwing to the head. Sitchatchawal moved more early in the 10th and pumped Monshipur with a jab. Monshipour connected at the midway point of the round with straight shots to the head. A right-left-right-left hook combination at 2:26 caused Monshipour to wobble backward. Sitchatchawal came forward and landed a huge, wound-up left hand before slipping to the canvas. He got to his feet and without interference from the referee landed five more shots to the head. As Monshipour stumbled back into the ropes, the referee stepped in and waved an end to the bout.