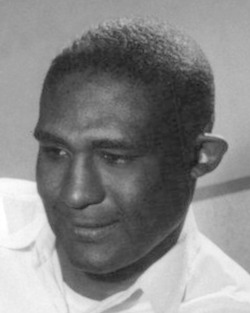 Heavyweight Boxer Marion "Marty" Marshall, known as "The Michigan Bomber," was the first man to beat Sonny Liston in the ring. He won 27 professional bouts and lost eight before retiring in 1957. He stayed active as a trainer until he got Alzheimer's disease, and had to stop. He loved to teach fighters how to throw a jab and a cross, his one-two move. Born in Georgia, he came to Detroit as an infant. He graduated from Northeastern High and served with the Marine Corps during World War II, then became a professional boxer. He fought Liston three times before Liston was heavyweight champion. The first bout was in Detroit on Sept. 7, 1954. Marshall won in eight rounds. In a rematch in April of 1955 in St. Louis, Liston knocked out Marshall. He retired about a year after the third match, a 10-round decision for Liston on March, 6, 1956, in Pittsburgh. Later, he trained generations of boxers in Detroit. He died at his Detroit home of complications from Alzheimer's disease. He is survived by his son, Dennis, and daughters Larcenia Lockhart, Brenda Gibson, Marian Henry and Beverly Ayers. His wife, Ernestine, died in 1990.