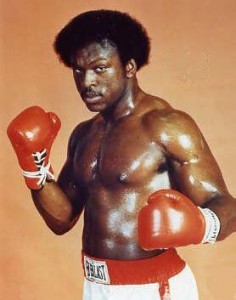 Michael Dokes won the WBA heavyweight title with a controversial first-round TKO of Mike Weaver on December 10, 1982. Most thought the fight was prematurely stopped. On May 20, 1983, Dokes had a rematch with Weaver and retained the title with a fifteen-round draw. On September 23, 1983, Dokes lost the title to Gerrie Coetzee by a tenth-round KO.

Dokes battled drug addiction for many years and was in and out of rehabilitation programs. He told Sports Illustrated that he trained for the Coetzee fight on Jack Daniel’s and cocaine.

Dokes was arrested in 1998 in Las Vegas after his girlfriend told police that he beat her, sexually assaulted her, and held her against her will. She testified that Dokes was a good person when he was clean and sober, but drug and alcohol use made him violent. In 2000, Dokes pleaded guilty to attempted murder, second-degree kidnapping, and intent to commit sexual assault. He was sentenced to 10 years in prison. Paroled in 2008, he lived in Las Vegas before returning to Akron to live with relatives in 2010. Dokes died in an Akron hospice from liver cancer.