Moyer later promoted boxing events, starting in 1956, taking over in Portland after the death of Tex Salkeld--with his most notable promotion being his nephew Denny's nationally-televised Welterweight title bout with Don Jordan in Portland in 1959. Moyer promoted in Seattle as well, including the Sonny Liston-Eddie Machen bout at Sick's Stadium [1]. He also promoted three boxing shows in Spokane in 1958, two of which featured his nephews, Denny and Phil. The other bout was an ABC-TV televised bout between Nino Valdes and Harold Carter at the Spokane Coliseum. Moyer's shows in Spokane did not do well financially, and he did not continue on in Spokane after the Valdes-Carter bout.

Moyer's parents, Harry and Rose, arrived in Portland around 1917 from Michigan. They struggled financially, and lived in the back of a store in Portland's Sellwood neighborhood, where Tommy grew up. His parents had always dreamed of running a movie theater, and finally were able to manage their first theater in 1933, in the Portland Sellwood suburb. The Moyers put the entire family to work in the theater, including young Tommy.

Moyer's father also boxed professionally, but not in Portland. Tommy dropped out of school to train full-time, and would go on to win a National Amateur title, and claim a record 151-6. He had a few bouts in Australia while serving in the Army. He then returned to Portland, where he had a brief professional career, winning all 5 of his professional bouts in the Pacific Northwest, retiring in 1946, he stated, because of over his disgust over cheap, dirty hotels and the criminal element in boxing.

Moyer served in World War II (1941-45) in the U.S. Infantry, Sunset Division [2], fighting in the Philippines. During this time, the Moyer family business continued to grow, and after the death of Moyer's father in 1951, the family business was turned over to Tommy, who managed the business, while his younger brother, Larry, handled the concessions. The brothers, however, began to fight, and in 1966, and with outside financing, Tommy developed his first multi-screen theaters. After the project began turning a profit for Tommy, the rest of the family filed a lawsuit to claim a share of the profits. Tommy won the litigation, and then sold his share in the family business for $390,000. However, his problems with his younger brother Larry continued, and the two remained business rivals for years. Larry continued to operate the family's older theater chain, and Tommy went on to expand his own theater circuit.

During the 1970s and 1980s, Moyer grew his business throughout Oregon, Washington, Alaska, Nevada and California. By 1989, he owned 298 screens, which at the time was the nation's 10th biggest theater company, and the largest privately-owned theater company in the United States. After the death of his wife in 1988, he sold his company to Act III Theaters in 1989 for a reported 192 million dollars. 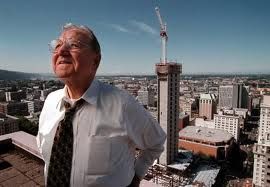 In the 1990s, Moyer ventured into real estate and development. His major developments included the 1000 Broadway Building [3], the Fox Tower [4], the Portland Meadows, and many other properties throughout the Portland area and Washington State.

Tommy Moyer was the executive producer for the 2011 documentary "After the Last Round". video trailer [5]