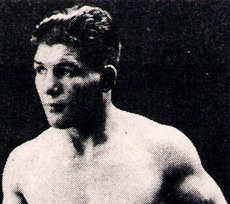 Most of the Fight Record and date corrections are courtesy of Miles Templeton of www.prewarboxing.co.uk