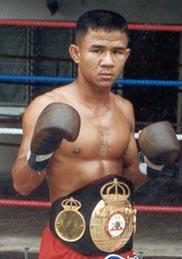 
Chana Porpaoin and his brother, Songkram Porpaoin, became only the second set of twins to both capture world titles (the Galaxy twins were the first).