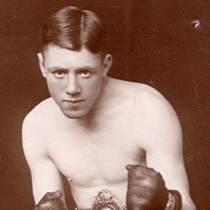 Dick Corbett was ranked the second-best bantamweight in the world in January 1932 by the National Boxing Association. He died from an accident at the Bethnal Green tube station during World War II, when 176 people were killed in the air-raid shelter. This record has been compiled by Miles Templeton and Richard Ireland of www.boxinghistory.org.uk. Please visit this site if you require further information about this boxer, as there is much more material available.