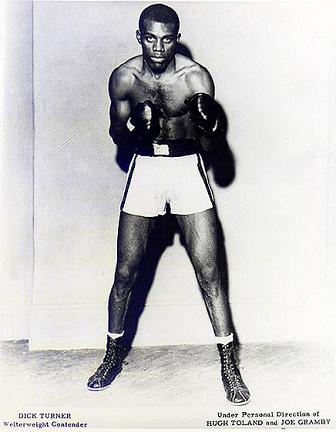 Thompson was a seasoned veteran who had fought Benny "Kid" Paret for the World Championship in 1960, and had held the Argentine & South American welterweight titles. Entering the ring that night, Thompson boasted a professional ring record of 113-10-9, with 1 no contest and 62 KOs!! That's 133 fights for Thompson versus just 12 for Turner! Clearly the cards were stacked against the hometown boxer, but upsets were Turner's business. Once again, he managed to pull a shocker, and won the decision. Such impressive wins marked Dick as a sure title bet. But sadly, Turner's career would end abruptly in 1964, after he suffered a detached retina in his bout with Kitten Hayward