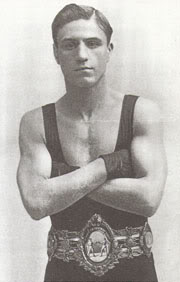 Digger Stanley began boxing professionally in 1899. In November 1903, he won the vacant British bantamweight title and in December of the same year he won the British flyweight title, but the titles were not recognised by the British Boxing Board of Control until 1909.

In October 1910, he fought Joe Bowker for the British and European bantamweight titles. He scored an eighth-round knockout to secure the titles. Stanley was also recognised by the National Sporting Club as the holder of the World bantamweight title, although he was not recognised as such in America.

In April and June 1912, he defended his European title twice against the Frenchman, Charles Ledoux. He won the first fight in Covent Garden on points, but lost the second fight in Dieppe, being knocked out in the seventh round.

In October 1912, he successfully defended his British title against Alex Lafferty, winning on points.

In June 1913, he lost his British title to Bill Beynon, on points, but four months later he beat Beynon on points to regain it. However, in his next defence, in April 1914, he lost the British title to Curley Walker on a disqualification in the thirteenth.

He continued to box but had only ten more fights, losing eight of them and winning two.

He had his last fight in February 1919, losing to Mike Blake, and died a month later, in poverty.