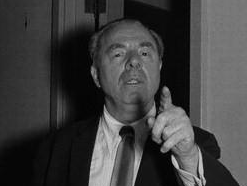 Photo shows Frank "Blinky" Palermo gesturing to UPI photographers after his arrest in part of a nationwide FBI crackdown on boxing figures. Palermo is being charged with trying to "muscle in" on world welterweight champion Don Jordon's earnings.

With Frankie Carbo (allegedly the brains of the fight fixing practice) Palermo's stable of fighters would win or lose on command and the payoffs in betting were astronomical. Palermo's biggest heist was the importation of his undefeated light heavyweight Billy Fox from Philly into Madison Square Garden and his subsequent knockout of Jake LaMotta in 1947.

LaMotta was a heavy early betting favorite. But shortly before the bell, the smell of a fix was in the air and the bookmakers refused to take any more bets. In the ring, LaMotta permitted himself to absorb countless punches from Fox without any retaliation. The referee stopped the bout with the customers convinced they had witnessed a fraud.

Years later, in front of a Congressional hearing into the evils of boxing, LaMotta admitted he took a dive. In the same hearing, former great lightweight champion Ike Williams testified that Palermo had given him a short count on his purses and the fighter was barely existing on welfare checks.

While the Fox fight may have been Palermo's biggest coup, his biggest mistake was his failed attempt in 1959 to steal away welterweight champion Don Jordan from his legal manager in Los Angeles. Truman Gibson Jr. (a vice president and lawyer for the reigning International Boxing Club monopoly) and two Los Angeles strong-arm guys (Joe Di Sica and Louis Dragna) were in on the plot with Palermo and Carbo.

The FBI handled the case, which involved the beating of witnesses. All five were indicted, convicted, and sentenced to Federal prison. Palermo served seven and a half years. An article about Palermo and his gangster connections appeared in the November 1996 issue of The Ring Magazine.