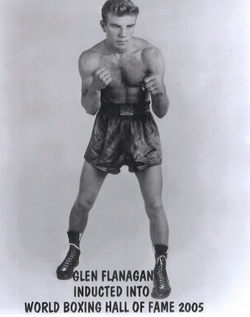 Glen Flanagan was a world-rated featherweight-lightweight. He was first rated in January 1950 and was last rated in February 1955. His best rating was # 3 in the world, and was a world-rated fighter for a total of 29 months. He fought 3 world champions and 26 ranked opponents, and was never knocked out in 121 professional fights (his loss to Danny Martin was stopped due to a cut).