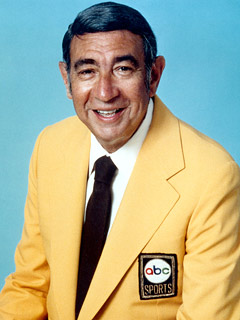 The Washington Post called the outspoken Cosell "arguably the best-known and most controversial sports broadcaster in the history of the medium."

Muhammad Ali was the athlete Cosell was most closely identified with, calling many of his fights and interviewing him numerous times.

After Larry Holmes successfully defended the World Heavyweight Championship with a lopsided 15-round unanimous decision against Randall (Tex) Cobb on November 26, 1982, Cosell announced that he would never again call a professional boxing on television.

The Holmes-Cobb fight was televised live in prime time by ABC. Cosell, who was the blow-by-blow announcer, was thoroughly disgusted by the one-sided contest. "This is as brutal a mismatch as I think I've ever seen," he told the television audience during the fight. Six days later, on December 2, 1982, Cosell announced his decision. "The Cobb fight did it for me," he said. "I don't want to be a party to the sleaziness." Cosell qualified his decision, however, by saying that he would still be willing to cover amateur boxing, which he did for ABC at the 1984 Olympics. "I love amateur boxing," he said. "But professional boxing, no. I have walked away from it." Cosell later said, "I now favor the abolition of professional boxing. You'll never clean it up."

When told that his fight with Holmes had driven Cosell out of professional boxing, Cobb said, "If I eliminate heart disease, if I walk on water, if I come up with a cure for crippled kids, I can't image a greater gift to mankind. That is my greatest accomplishment."

Howard Cosell, who delighted and infuriated listeners during a 30-year career as the nation's best-known and most outspoken sports broadcaster, died yesterday at the Hospital for Joint Diseases in Manhattan. He was 77.

Mr. Cosell, who had been in failing health, died of a heart embolism, said his grandson, Justin Cohane. He had undergone surgery in June 1991 for the removal of a cancerous chest tumor.

From his first days on radio in the 1950's to the peak of his fame during his 14 years on "Monday Night Football," Cosell -- once simultaneously voted the most popular and the most disliked sportscaster in America -- tended to be loved and loathed for the same undisputed characteristics: his cocksure manner and his ebullient, unqualified immodesty.

"Arrogant, pompous, obnoxious, vain, cruel, verbose, a showoff," Cosell once said. "I have been called all of these. Of course, I am."

Partly because he entered sports broadcasting in the mid-1950's, when the predominant style was unabashed adulation, Mr. Cosell offered a brassy counterpoint that was first ridiculed, then copied until it became a dominant note of sports broadcasting.

"I tell it like it is," was the way he put it in a signature remark that was often challenged but never to the point where Cosell would back down.

When the tape of a football game established that Cosell had referred to a black player as "that little monkey," Cosell, whose civil rights credentials were secure in any event, simply denied it.

And if there were those who were shocked when he likened the autocratic International Olympic Committee chairman Avery Brundage to "William of Orange" or offended when he suggested that most baseball players were "afflicted with tobacco-chewing mind," their complaints were music to Mr. Cosell's ears.

To Mr. Cosell, criticism was just another form of homage. If the criticism came from other broadcasters. he always considered the source: "There's one thing about this business," he once said, "there is no place for talent. That's why I don't belong. I lack mediocrity."

Mr. Cosell had radio shows on the ABC network, made many cameo appearances in movies and on television, testified before Congress, covered the Olympics and became so closely associated with Muhammad Ali that he was widely regarded as the boxer's alter ego. But he achieved his greatest fame and reached his largest audience from 1970-1983, when he was an analyst for ABC's "Monday Night Football."

Mr. Cosell owed his position on "Monday Night Football" to his outspoken ways. Roone Arledge, the ABC executive who hired him in 1969, had made it a point that his broadcasters on his new program would be independent of the National Football League. Hiring Mr. Cosell drove the point home.

Although Mr. Cosell was known for his knack for making the most straightforward observation sound as if it were being translated from the Latin, he was rarely as sesquipedalian as newspaper and magazine writers inevitably became when they described him.

He spoke in a clutched-throat, high-pitched Brooklyn twang with a stately staccato that tended to put equal stress on each syllable of every word, infusing even the most mundane event with high drama.

Howard William Cohen was born on March 25, 1918, in Winston-Salem, N.C., to Isadore and Nellie Cohen. His father, an accountant for a chain of clothing stores, eventually moved the family to Brooklyn, where Mr. Cosell played varsity basketball at Alexander Hamilton High School before attending New York University. During his college years he changed his name to Cosell, which gave rise to a famous put-down later: "Howard Cosell, a man who changed his name, wears a toupee and tells it like it is."

Mr. Cosell had so little vanity that he used to hang his toupee on a hatrack when he was off camera. But he was stung by the implication that he had changed his name from Cohen to disguise his Jewish heritage. He chose Cosell, he said, because it was close to the original spelling of the family's Polish name.

With his older brother, Hilton, following their father's profession, Mr. Cosell was steered to the law.

"I was just another Jewish boy," he said, "who became a lawyer because his parents wanted him to be one." Even so, he excelled at New York University Law School, where he was editor of the law review.

His law practice included entertainment and sports clients, including Willie Mays. After helping a client organize Little League in the New York area, Mr. Cosell came up with the idea of a radio program in which Little Leaguers would interview major league stars.

ABC bought the idea in 1953. The twice-a-week series -- once described by Mr. Cosell as a "combination of 'Juvenile Jury' and 'Meet the Press' " -- became something of a hit, largely because the questions the Little Leaguers asked were Mr. Cosell's.

"I give the youngsters leading questions," he explained at the time. "Like, 'Coach, you once called your team a load of garbage. Now what did you mean by that?' "

In 1956, he quit his law practice and began doing sports reporting and commentary for ABC. Mr. Cosell, who tended to regard his colleagues as cheerleaders, did not endear himself when he let it be known that he was not overly impressed with the world they covered, either.

But Mr. Cosell's very irreverence tended to infuse the toy department with an aura of importance. As Larry Merchant, then of The New York Post, once put it, Mr. Cosell made "the world of fun and games sound like the Nuremberg trials."

That's what Mr. Cosell, a penetrating interviewer with a penchant for asking athletes trenchant questions, had in mind. "I speak my mind," he said. "I don't think it's controversial to ask them the same sort of questions asked of Dean Rusk," then the Secretary of Defense.

Mr. Cosell also freely shared his opinions, most famously his staunch defense of Ali after the boxer, claiming religious objections, refused to be drafted and was convicted of draft evasion and stripped of his championship.

"I enjoyed interviews with Howard the best," Ali told The Associated Press yesterday. "We always put on a good show. I hope to meet him one day in the hereafter. I can hear Howard now, saying, 'Muhammad, you're not the man you used to be.' "

Although he was a quick study who could not help achieving a certain mastery of the strategies and tactics of the sports he covered, Mr. Cosell was often derided by competitors for his comparative ignorance. "I don't regard myself as a rabid fan at all," he said. "I couldn't care less who wins what game. To me it's the people, the way men react under pressure, the quality of courage."

The focus on personalities was successful, especially after he joined ABC's "Wide World of Sports" as a boxing commentator, frequently interviewing an Ali who was at the peak of his fame, some of which rubbed off on Mr. Cosell. Even after beginning his stint on "Monday Night Football" he was a fixture at virtually every major ABC television broadcast.

In December 1982, after watching an especially brutal beating, he announced he would do no more boxing commentary because, he said, "I am tired of the hypocrisy and sleaziness of the boxing scene."

He left "Monday Night Football" after the 1983 season (and the end of a four-year, $6 million contract) saying that pro football had become "a stagnant bore."

In January 1992, six months after his surgery for cancer, he cut his last ties to broadcasting, retiring from two ABC radio programs.