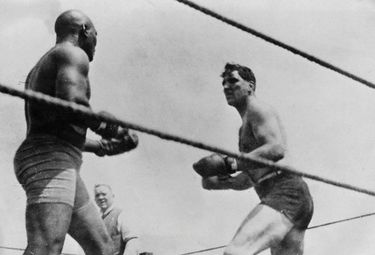 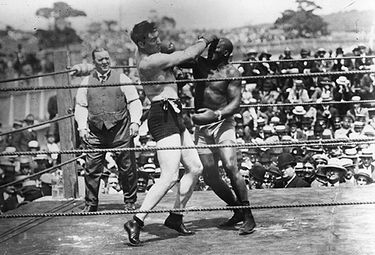 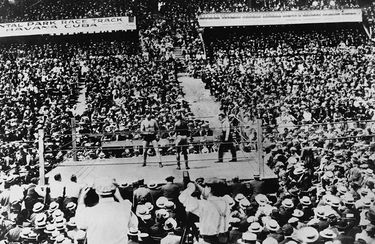 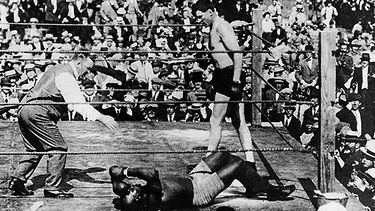 Willard said before the fight that he expected to take a beating for the first 10 or 15 rounds and had trained specifically for that scenario. Johnson tried his best to make it come true.

The bout opened with both fighters facing one another with gloves at their waists and hoping their head, shoulder, foot and hand feints would force the other man out of position. Johnson easily stepped away from a lunging left/right to the body, smartly smothered a prospective jab to the head and landed a quick counter right over the top. Most of the fight was waged at long range with each fighter striking a defensive upright posture with the majority of their weight on the back foot. While Willard did most of the leading, Johnson did the majority of the scoring with singular thrusts and occasional headlong rushes. When he chose to punch – which wasn’t often – Johnson’s quick and damaging blows enabled him to build a big early lead. That said, Willard soaked up the punishment Johnson dished out with nary a flinch.

The 12th saw Johnson unleash a furious burst that drove Willard to the ropes but, once again, the challenger shook off the damage and resumed his patient, jab-heavy boxing. The tenor of the fight began to turn in the 17th when Willard stepped up his forward movement as well as his work rate. Most of his one-twos fell short of the mark or were muffled by Johnson’s open gloves but Willard’s proactive attitude sent a forbidding message to the champion: “I am still strong and you still have nearly 30 more rounds of fighting to do.”

Johnson regained a semblance of control in the 18th, thanks to his occasional charges. At round’s end, Willard draped his huge left arm around Johnson’s shoulder before beginning his walk toward the corner. Willard was decidedly less friendly in the 19th, for now it was he who began and ended most of the skirmishes and his nimble semi-circling stood in stark contrast to Johnson’s flat-footedness. All the while Willard fired ramrod jabs toward Johnson’s face and followed with rights to the body or the jaw. It clearly was Willard’s best round thus far and given the difference in energy level, more trouble was in store for Johnson – much more.

The fusion of Willard’s strength, his own lax conditioning and the searing conditions forced Johnson to confront the reality that his championship reign was in peril. He always had realized that he lacked the stamina needed to complete 45 rounds but he thought Willard’s perceived clumsiness and inexperience would eliminate the possibility of a long fight. Now that he had one, Johnson had no choice but to step out of his defensive shell and gun for the finish.

Willard continued to jab effectively during the first two minutes of round 20 but the challenger’s right hand to the side of the head ignited a fury within the champion. His flashing fists bulled Willard across the 20-foot ring and while Johnson’s punches landed accurately, they lacked the power that had left the mighty Jeffries in a heap five years earlier. The rally was short-lived, as was the one Johnson produced in the next round after another Willard right to the temple stoked his fire. This time, however, Willard answered with his own assault in the round’s final minute that caused several ringsiders to leap joyously to their feet.

From that point forward, Johnson barely had the energy to hold up his gloves, much less hold off a 238-pound giant. Suddenly, the once-invincible Johnson appeared far older than his 37 years.

“Time had done its work,” the Associated Press reported. “It had been the opinion of Johnson and many of his friends that he did not have to be in the best of condition to whip Willard, underrating the latter’s splendid condition and youthful stamina.”

According to a New York Times account, Johnson asked Curley following round 22 to “Tell my wife I’m tiring and I wish you’d see her out.”

The end came shortly before the halfway point of round 26. As the pair maneuvered toward the challenger’s corner, Willard fired a lunging jab followed by a pulverizing right to the jaw. Upon impact, Johnson’s head snapped violently to the side while his hands reached out and tried to take Willard down with him. That effort failed, so his stricken frame slid down Willard’s torso and legs before landing back-first with a thud. As Johnson shaded his eyes from the blinding sun, referee Welsh positioned himself four feet directly behind the champion’s head and tolled the count. Once he reached “10,” he immediately raised Willard’s right arm and walked toward ring center.

After the fight, referee Jack Welch said: "If I had been compelled to give a decision at the end of the twenty-fifth round, it would have been Johnson's by a wide margin. Up to the twentieth round, Willard had one won only one round by a real margin and two or three others by the slightest shade. In the thirteenth and fourteenth, I was almost sure Johnson would knock Willard out, but Willard showed that his jaw and body were too tough. Johnson put up a wonderful fight to the twentieth round, but age stepped in then and defeated him."

The sudden crowning of a new champion set off a massive celebration inside the arena and dozens poured into the ring before members of the Cuban cavalry escorted the fighters to their respective dressing rooms, then their hotels. As news about Willard’s victory spread, townspeople lined the streets with Willard’s supporters waving white flags while Johnson’s backers brandishing black ones.

As for Johnson, he initially handled the defeat with grace.

“It was a clean knockout and the best man won,” Johnson told the New York Times. “It was not a matter of luck. I have no kick coming.”

Johnson struck a similar tone later that night when the pair was given souvenir gold watches from the “Citizens of Havana.” Johnson also received a loving cup from Willard’s trainers and Curley.

“The best man won,” the ex-champion declared. “I would not belittle another man’s accomplishment and I wish Willard all the luck he would wish himself.”

Nine months later, however, Johnson dramatically changed his tune. On January 2, 1916, Johnson, for a $250 fee paid by Nat Fleischer, future publisher of The Ring Magazine, released a combination handwritten/typewritten confession that he threw the Willard fight in exchange for undisturbed re-entry into the United States and $50,000 in cash. Johnson said the original agreement was to have him end the fight in round 11 once his wife indicated the money was in hand. But when that round came and went, Johnson continued to fight and because he thought he was being double-crossed, he fought to win. Then, after the end of round 24, he said he saw his wife, Lucille Cameron Johnson, give the predetermined signal – one version was the wave of a white handkerchief while another was a nod of her head – and “I let the fight end as it did.”

The controversy was addressed in the October 1956 and January 1969 issues of The Ring. The latter treatment was sparked by the success of the Broadway play “The Great White Hope” that starred James Earl Jones as the semi-biographical Jack Jefferson.

In the confession, Johnson said he informed his wife the morning of the fight of her role in the plot – the collection of the remaining money due him – while Curley paid him his money for the bout before he left the hotel. Johnson told Lucille to watch for his signal to go back to the box office and retrieve the rest of the money from Curley. After doing so, she was to return to ringside and non-verbally inform him that the money was secured.

Johnson said an incomplete count at the box office caused him to delay his surrender but once he received the signal he was seeking, he directed his wife to leave the arena. The fight ended shortly thereafter.

“I was happy when it was all over,” Johnson said in his confession. “I didn’t mind losing as I did so long as I knew that the loss would enable me to see my mother. But it didn’t.”

Johnson later repudiated the confession, saying he was in need of money and had said that no one would have wanted to purchase a statement that declared he had lost honestly. Fleischer said he bought the confession in order to suppress it since Johnson had already confirmed his story wasn’t true. Willard was never implicated in the alleged fix.

“Nobody ever took Johnson’s charges of fakery seriously,” Curley said years later. “He was well past his prime, fat and dissipated, and he was worn down and knocked out by a strong, game and well-conditioned opponent.”

Willard also dismissed Johnson’s story, saying, “if Johnson throwed it, I wish he throwed it sooner. It was hotter than hell down there.”

Johnson remained in exile until July 20, 1920 when he surrendered to federal agents at the U.S.-Mexico border and was sent to the United States Federal Penitentiary in Leavenworth, Kan., where he served nearly 10 months before being released on July 9, 1921.