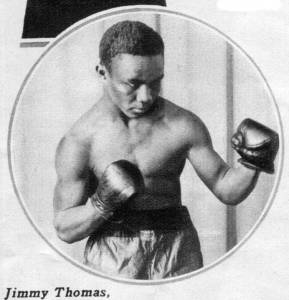 A United States census (1930 census?) had Jimmy Thomas stating his occupation as "boxer/waiter." Family lore says that Thomas owned a hotel in Philadelphia or Boston after he had retired from boxing, and that he helped young boxers in Boston at the local YMCA for years before he passed away, although his family is not quite certain it was Boston.

In addition to the fights listed in the linked record, Thomas probably also had the following:

According to the U.S. Census database on the Ancestry.com website, one James Thomas, a black 18-year-old native of Georgia, was a "roomer" who was living in Pittsburgh, Pennsylvania during 1930. He was listed as a "Pugilist" who worked on an "Own Business" basis.