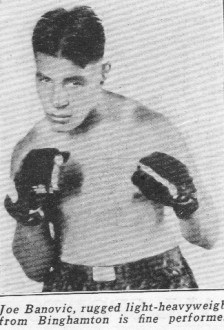 Joe Banovic boxed under the name "Joe Boland" in his early career. The following fights, probably fought under the Boland name, are included in his published records, but have not yet been traced.

These fights probably occurred in Binghamton, NY, and the coal-mining area of eastern Pennsylvania, mainly Wilkes-Barre and Scranton.