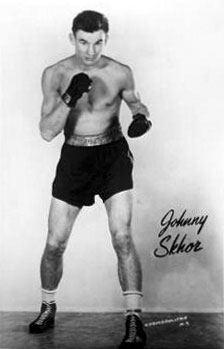 Johnny Shkor turned professional in 1939. He was managed by Johnny Buckley, who had piloted Jack Sharkey to the heavyweight title.

Shkor (Pronounced "score") joined the United States Navy during World War II. While stationed in Hawaii he won the Pacific Ocean Heavyweight Title. After being discharged in 1945, he returned to boxing.