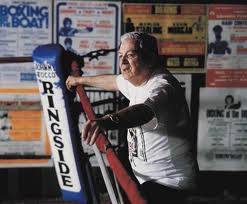 Founder of the famed Johnny Tocco's Ringside Gym in Las Vegas, Nevada. Johnny opened the gym at the corner of Charleston and Main Streets in the mid 1950s, and remained active there until his death in 1997. According to an article written in The Los Angeles Times by Earl Gustkey titled A HOT LITTLE GYM June 16th, 1987, Tocco owned a bar at the location of the gym in the early 1950s called the Zebra Room where he got tired of breaking up fights, so he converted the bar into the boxing gym.