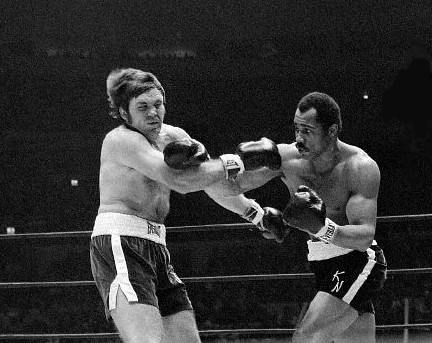 Norton hits Quarry with a right

Norton Stops Quarry In Round 5

NEW YORK (AP) — Ken Norton, bidding for another chance at the heavyweight championship of the world, stopped Jerry Quarry in the fifth round of their 12-round bout at Madison Square Garden Monday night.

The fight served as a closed circuit preliminary to the heavyweight championship bout in Cleveland between Muhammad Ali and Chuck Wepner.

Referee John LoBianco stopped the bout at 2:29 of the fifth round with Quarry's face a bloody mask and Norton landing lefts and rights at will.

Dr. Harry Kleiman had examined Quarry's right eye at the conclusion of the third and fourth rounds after Norton had cut his opponent in a bitter exchange in the middle of the ring during round three.

Norton, the ex-Marine from San Diego, had opened fast, scoring well with lefts and rights in the first round.

Quarry, the fifth-ranked heavyweight, fought back in the second round, stalking Norton and landing blows repeatedly. In the third round, after Norton cut Quarry at the side of his right eye, Quarry came storming back with lefts and rights that backed Norton against the ropes.

But that was Quarry's last burst. In the fourth round, Norton became the slugger, showering Quarry with lefts and rights and staggering his opponent several times.

By then, both fighters were covered with Quarry's blood and Norton went to work on the other eye.

Norton quickly raised a welt and closed it and soon Quarry was fighting blind. It was only a question of time as Norton battered his game opponent around the ring throughout the fifth round until LoBianco jumped in and stopped the fight.

The loss was Quarry's eighth in 62 bouts.