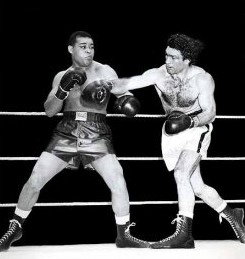 On October 14, 1949, Valentino challenged Ezzard Charles for the National Boxing Association heavyweight title in San Francisco and lost by an eighth-round knockout.

Valentino boxed an exhibition against Joe Louis in Chicago on December 7, 1949, and was knocked out in the eighth round. Valentino retired after the exhibition.

Following his retirement from boxing, Valentino worked as a maitre d' at Scoma's Restaurant in San Francisco.

An article titled "A Second Life: The Career of Pat Valentino" by Carlos Acevedo appeared in IBRO Journal Issue No. 110.