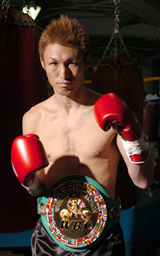 
On January 29, 2006, Koshimoto won the WBC featherweight title, with a 12-round split decision over defending champion In-Jin Chi in Fukuoka, Japan. This was the 35-year old Koshimoto's second attempt at a world title, having been previously knocked out in the 9th round by Freddie Norwood in 2000; also in Fukuoka. Koshimoto was stopped in the 7th round of his first title defense against Rodolfo Lopez of Mexico on July 30, 2006 in Fukuoka. Koshimoto was hospitalized after the fight, and promptly announced his retirement. Koshimoto was managed and trained by his own father, Hidetake Koshimoto.