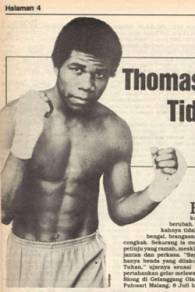 
Thomas Americo is the first Indonesian (and Timor Leste) to challenge for a world title belt.

Thomas Americo was reportedly killed in a political riot during East Timor independence in 2000. Americo was dragged from his car and shot to dead by some militias in his hometown, Dili, East Timor.