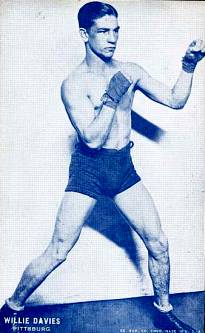 According to the U.S. Census Records database on the Ancestry.com database, one William Davies, 23 years of age, was living with his wife, son and some other relatives in Speers, Washington County, Pennsylvania during 1930. A "professional fighter" and a native of Wales, he owned his home, which was valued at $7,500.