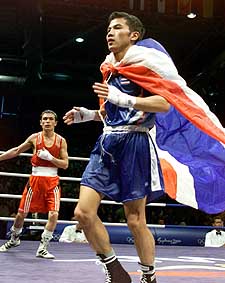 Wijan Ponlid (born April 26, 1976) is an Thai boxer who competed in the Flyweight (51 kg) at the 2000 Summer Olympics and won the gold medal. He returned to Thailand to a hero's welcome: honored with a new house, over 20 million baht, a job promotion (as a police officer in Suhkhothai), and paraded at the front of a procession of 49 elephants through the city of Bangkok.

Ponlid defeated Vardan Zakaryan of Germany in round 1, Andrew Kooner of Canada in round 2, upset Cuban Manuel Mantilla in the quarterfinal, beat Vladimir Sidorenko of Ukraine in the semifinal and finally met Atlanta silver medallist Bulat Jumadilov of Kazakhstan in the final. The Thai led after every round of the bout, despite Jumadilov taking the second 6-5 to pull back to 9-7 behind, and caused endless problems for the Kazakh with his probing right lead and quick left.

In a messy fight, both men fell to the canvas twice in the third round as they pushed and clinched, but Ponlid led 15-11 at the bell and then made sure of gold by dominating the fourth.

And just as Thai supporters feted Somluck in Atlanta for winning Thailand’s first Olympic gold in 44 years, they were just as ecstatic, waving their national flags and chanting his name, as Wijan was acclaimed the champion.

In victory Wijan held aloft a framed photo of King Bhumibol in the ring with the red, white and blue Flag of Thai flag draped around his shoulders.

Has been called the "Thai Pea" in reference to another great southpaw defensive boxing master, Pernell "Sweet Pea" Whitaker.

This article is from wikipedia: [1]]