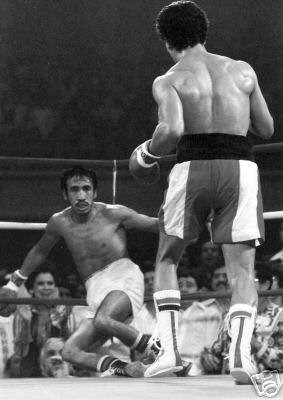 Down for the Count: Wilfredo Stops Zarate in Five (Defense #6)
By Christian Giudice, BOXING.com, August 29, 2014

It was one of those fights where the rabid Mexican and Puerto Rican fans expected all hell to break loose. Fixated on the middle of the ring, fans in the Roberto Clemente Coliseum in San Juan, Puerto Rico appeared ready to explode. A wave of excitement spread through the venue; that same passion would only intensify as the fight took hold.

Many boxing experts would look back to this bout as the precursor to the popular Mexican-Puerto Rican boxing rivalry. The enmity was fueled by WBC super bantamweight champion Wilfredo Gomez, who had earned a reputation for dousing the fire of Mexican challengers, the most recent a seventh-round stoppage of Mexico’s Juan Antonio Lopez in April 1978. Now, nearly five months later, Gomez was making his sixth title defense and successfully chartering a path to greatness. An opponent inextricably linked with Mexican’s past boxing giants, Carlos Zarate entered with a record of 52 victories, no losses, with 51 knockouts.

To add to the fervor surrounding the bout, Gomez and Zarate had a combined record of 73-0-1, with an astonishing 72 KOs. Similarly, when Roberto Duran and Sugar Ray Leonard met in 1980, they combined for a record of 98-1, but lacked the same impressive knockout ratio. Physically, Zarate stood two inches taller than Gomez, but lacked the same fluid movement and speed. Zarate relied on power in both hands, and would be in hot pursuit of the knockout punch; comparatively, Gomez had confidence that his pressure and ability to adapt to any challenge would be the key. For Gomez, there was no hurry: the knockout would eventually come.

Neither fighter made the 122-pound limit on the first attempt as both weighed over 124 pounds. In fact, Zarate needed four trips to the scale to make 122. When the bell rang on October 28, 1978, neither fighter looked to set a blistering pace. Zarate and Gomez took turns as the aggressor. Instead of coming forward, Gomez appeared comfortable in the counterpuncher role. As Zarate stalked, Gomez flitted in and out of punching range.

Eventually, Gomez’s confidence grew when he landed the first significant punch of the fight. It occurred when Gomez countered Zarate with a straight right and then eased him into a lunging left hook. Both fighters spent a good portion of the first round devising a clear strategy to get inside. Patiently, each fighter embraced this more passive approach over the first three rounds. Although Gomez was more effective landing an overhand right, Zarate opted for a left uppercut thrown from below his waist.

Toward the end of the third round, Gomez beautifully set Zarate up with a lazy left, and then immediately closed the gap with a jolting right hand that landed directly above Zarate’s guard. Amid a torrent of fans itching for the typical Gomez attack, the champion had still not yet unleashed his blend of speed and power.

Early in the fourth, Gomez was content to fight going backwards and let Zarate come to him. Mixing in a check left hook and an occasional jab, Gomez disrupted Zarate’s gameplan. Susceptible to left hooks and an occasional straight right, Gomez hadn’t completely deciphered the Mexican legend’s style. Still, Gomez recovered to land a lead hook that sent Zarate to the canvas toward the end of the round.

Zarate took a standing eight-count and immediately began to take more punishment. Gomez followed him to the other ring post and cautiously looked for an opening; seconds later he found one, a clean right hand that staggered Zarate. Not finished, Gomez followed him to the middle of the ring where he sent him down for the second time with a glancing right hand after the bell. The referee, Harry Gibbs, stepped in to start the count, but Zarate had risen and Gomez ran over to him to land one more left hook.

Gomez’s intensity reached its peak as he refused to sit in his corner, anxiously awaiting the chance to end the fight.

Continuing the onslaught in the fifth and final round, Gomez landed three hooks, the last one a glancing blow off of Zarate’s head. Then, Gomez moved Zarate to the ropes – with a right hand to his ear – where he landed the same uncontested vicious left hook that sent him down a round earlier. Seconds later, Gomez sent Zarate through the ropes as Gibbs made a half-hearted attempt to step in.

“When Wilfredo fought Zarate, Zarate was not at his best,” said Paul Ruiz, who managed Alfredo Escalera at the time. “Gomez did get ready. He had to be at his best. But I didn’t expect that type of performance.

“I did expect a better fight from Zarate. Everybody was going crazy in Puerto Rico. Gomez had just beaten the best Mexican since Ruben Olivares. Zarate could punch like a mule, but he didn’t show anything that night.”

The fight was stopped at :44 of the fifth when Gomez knocked Zarate down again and then viciously stepped in to land a straight right as Zarate crawled on his knees. Zarate’s corner threw in the towel even before Gibbs began the count. In the end, Zarate, a courageous warrior, wilted under the extreme pressure that Gomez applied. As soon as the towel was thrown, the celebration began!