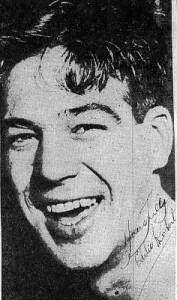 The Sept. 2, 1942 Tacoma News Tribune reported that Eddie Roberts's true name was Water (Walter?) Tender Rowland. He was back in the United States Navy at this time. In fact, reportedly he had just come out of the Navy when he started boxing professionally some 20 years earlier.

Roberts was ranked as high as #2 in the Welterweight division, following his 1st round kayo of former Welterweight champion Joe Dundee in San Francisco.