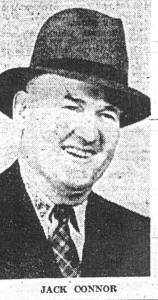 Jack Connor (born: c. 1876) was an American boxing trainer and manager based out of Tacoma, Washington.

He is most famous for training World Middleweight Champion Freddie Steele. He also worked with many other boxers out of Tacoma, before and after Steele's career. He managed Davey Ward and Charley Johnston, for example. He was elected into the Tacoma Sports Hall of Fame. Connor was still alive at age 92 in November 1968, when he was honored at a show held in Tacoma.