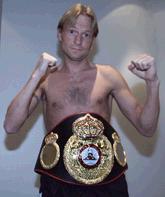 Bredahl boxed as an amateur and represented Denmark in the 1988 Summer Olympics in Seoul, South Korea before turning professional.

In December 1988, Bredahl turn professional winning his first fight at the Sheraton Hotel in Copenhagen, when Bredahl beat England's Gordon Stobie with a points decision over six rounds. Bredahl won seven of his first eight fights in a similar fashion.

Bredahl won his first title belt, the Vacant EBU (European) Bantamweight Title, in March 1992 with a seven round knockout win over Scotland's Donnie Hood. Later that year Bredahl won the WBO Super Flyweight Title with a win over Jose Quirino.

Bredahl first opportunity to fight for a recognised world title belt came in December 1995 when he challenged Northern Ireland's Wayne McCullough for his WBC Bantamweight title. However, Bredahl suffered the first defeat on his career when McCullough beat Bredahl by a knockout in the seventh round to retain his title.