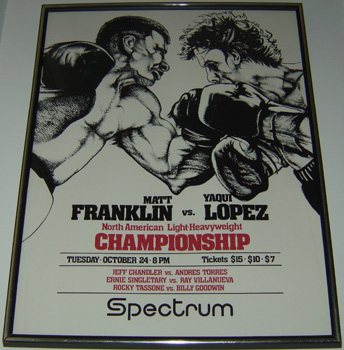 Matthew Franklin (Matthew Saad Muhammad) scored an 11th round TKO over Alvaro "Yaqui" Lopez Tuesday night to retain his NABF light heavyweight title. Franklin clinched the victory with a right hand punch that landed on Lopez' left eye, drenching the fighter's face with blood. As soon as the punch landed, referee Frank Cappuccino waved his arms to signal the end of the bout at 2:59. Lopez was the aggressor in the 1st round, but Franklin held him off with rapid-fire jabs. Franklin led out in the second. But a left hook that completely spun Lopez around led Franklin into a premature celebration and gave Lopez time to recover. Lopez sprained his right ankle in that exchange, but took the fight to Franklin in the 4th. In the 11th, Franklin cut Lopez' eye open and that was when the fight was called. (From The Associated Press).