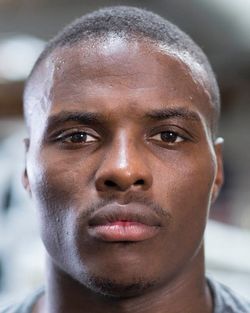 Peter Quillin, the son of a Cuban father and African-American mother, was born in Chicago, Illinois, but grew up in Grand Rapids, Michigan.

He calls himself Kid Chocolate in honor of the original Kid Chocolate, Eligio Sardinias Montalvo, who was Cuba's first world champion.

Quillin tosses out Hershey's chocolate kisses to the crowd after each win.

With just a few dollars to his name, Quillin decided to move to New York City when he was 18 years old to pursue a career in boxing.

Quillin was promoted by Cedric Kushner early in his career. In 2010, he signed with Golden Boy Promotions.

He made three successful title defenses before vacating the WBO title on September 4, 2014. He was faced with a WBO-imposed deadline of 4 p.m. ET on September 4 to sign a contract for a mandatory defense against Matt Korobov on November 1. Quillin, who had already been given two extensions to the signing deadline, would have been stripped of his title had he not vacated. Quillin told SI.com that his decision to pass on the fight was "emotional" and due to "a lot of different reasons." Chief among them, Quillin said, was the birth of his son, Joaquin, on August 23, 2014. Quillin, whose wife suffered a miscarriage the previous year, said he was determined to spend time with his family and would not be ready to fight in November.

On April 11, 2015, Quillin returned to the ring against Andy Lee, who knocked out Korobov to win the vacate WBO middleweight title the previous December. It ended up being a non-title bout after Quillin failed to make weight, coming in half a pound over the 160-pound middleweight limit. After twelve rounds, the fight was declared a draw and Lee retained the title.