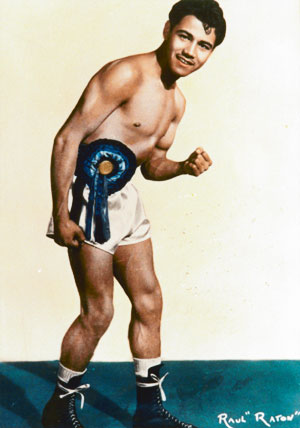 Raul (Raton) Macias came from the "Tepito" barrio in Mexico City, which is known as one of the toughest neighborhoods in the country and as the birthplace of many boxing champions.

He was considered perhaps Mexico's first boxing "idol." As a professional, he won the North American Bantamweight title, defeating Olympic Flyweight Gold Medalist Nate Brooks in front of a crowd of more than 50,000 fans in Mexico City in 1954. After retiring from boxing, Macias became a well-known movie actor. (See, e.g., El Raton.) He was inducted into the World Boxing Hall of Fame. Raton died in 2009 of prostate cancer.

He began his amateur career at age fourteen, winning the National Junior Flyweight, Flyweight and Bantamweight titles. He won a bronze medal at the Pan American Games. Raton represented Mexico as a bantamweight at the 1952 Helsinki Olympic Games. His results were: