Name: Roberto Garcia
Alias: La Amenaza
Hometown: Weslaco, Texas, USA
Birthplace: Reynosa, Tamaulipas, Mexico
Stance: Orthodox
Height: 175cm
Reach: 183cm
Pro Boxer: Record
Roberto Garcia was born in Reynosa, Tamaulipas, Mexico and moved to Houston, TX, at a very young age. It was in Houston that Garcia was first introduced to boxing. His father turned the garage into a gym were he trained Garcia's two older brothers, Rafael and George. Even though he was still too young to box, Garcia began imitating his brothers. He was nicknamed "La Amenaza" ("The Menace") as a young boy by his father, because he destroyed everything in his path.

Garcia grew up in one of Houston's most dangerous neighborhoods, where nothing ever came easy. At the age of 10 he was dealt a bad hand: in a instant he lost both his parents, Rafael and Antonia Garcia. The loss of his parents is something he doesn't like to talk about. Garcia moved with his two older brothers to Weslaco, TX, where they lived with their maternal grandparents. The next few years were the hardest for Garcia. Without his parents, he reportedly lost his sense of direction, rebelling against authority, and bouncing from home-to-home and then to relatives from his father's side -- his aunt Chavela and uncle Luis.

Boxing and Garcia crossed roads again when he was 16-years-old. During his junior year in high school he was challenged by a local Boys and Girls Club Champion at school. Not wanting to get into any more trouble, Garcia opted to take the fight into the ring after school. "My very first sparring session didn't last too long. It was over in the first round. As soon as I hit him on the nose he quit, I think it might have been broken," Garcia was quoted as saying. The local boxing coach talked to him after the sparring session and convinced him to pick up boxing; since that day boxing has been his number one priority. 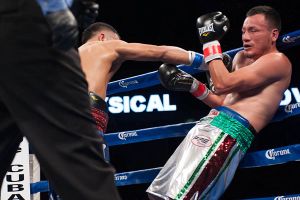 During the next three years Garcia won three consecutive Rio Grande Valley Golden Gloves Championships. He then set his sights on the pro ranks. He left home to train in his birth-place of Reynosa, Mexico, with then-WBF Intercontinental Super Bantamweight Champion Nick Bentz. Garcia was convinced to take a few more amateur bouts before making his professional debut.

Entering the Tamaulipas Regional Championship Tournament Garcia won the first two bouts by KO. In the finals he met the defending champion, in what was billed as the fight of the tournament. Garcia won a close decision, finishing his amateur career with a record of 23-3 (17 KOs).

Garcia quickly got recognition in boxing by winning eight consecutive fights, seven by KO in his first year as a pro. After signing a managerial contract he began fighting on more lucrative fightcards, several televised by Telefutura and NBC. "Fighting on the under cards of bigger names such as Rafael Marquez, Vivian Harris, Diosbelys Hurtado, Rocky Juarez, and Juan Diaz makes me train harder," Garcia said, "because I want to be where they are. I want to be a World Champion!"

After suffering a minor set back in April of 2003, Garcia parted ways with trainer Fernando Castrejon, who had been the right-hand man of legendary Mexican trainer Nacho Beristain. After a grueling search for a new trainer, Garcia found Nelson Fernandez, manager of former WBA Welterweight Champion Andrew "Six Heads" Lewis.