The St. Nicholas Arena was located at 69 West 66th Street, on the northeast corner of 66th Street & Columbus Avenue, Manhattan. "St. Nick's" opened Nov. 7, 1896, exclusively as an ice hockey and ice-skating rink until 1906, when it began to offer boxing under the "membership club" pretense. At this time public admission prize-fighting was illegal under New York State law until 1911, when the Frawley Law made such boxing legal, so boxers were introduced as "members" of the St. Nicholas club. With a capacity of some 4,000, it presented Monday, Wednesday and/or Saturday night shows, depending upon the era.

During the 1910s, St. Nick's chief rival was Madison Square Garden. Jess McMahon and his brother Eddie were its managers, promoters and matchmakers early that decade.

In April 1914 Billy Gibson took over its lease to present weekly Saturday night shows under the auspices of his new Stadium Athletic Club. His first show was actually held Friday, April 24. Later Bill Johnston was one of its more famous promoters, for about 25 years, along with his matchmaking brother James J. Johnston (Jimmy Johnston). However, it appears that Gibson was involved with St. Nick's since as early as August 1913. El Paso Herald [1] British-born Jimmy Johnston renamed the club Royal Windsor during World War II; the club later was briefly renamed the London Sporting Club. Other promoters during the club's last 30 years included Mike Jacobs, Marty Cohen, Dan Caplin, Hymie Caplin, Johnny Attell, Tex Sullivan, Teddy Brenner, and Irving Cohen 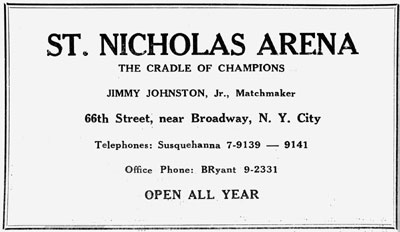 Joe Silver was the manager for its final 32 years. Johnny Addie was an announcer here from 1948-1962.