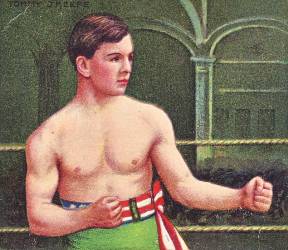 
O'Keefe started boxing at age 10 with older kids in his neighborhood of Fifth & Carpenter. At age 14, walked to the old Lyceum Theater, Eighth & Vine, to start his ring career as an amateur. He took on the name O'Keefe early on. He became a protege of Jack Blackburn, trainer for heavyweight champion Joe Louis. Johnny Loftus seconded for O'Keefe when he would fight in Reading. He boxed as a bantam, feather, and lightweight. He retired in 1918 after losing to Willie Jackson.

After he retired, O'Keefe became a Pennsylvania Commission boxing referee in 1925. He lived in both Philadelphia, and at 909 Church Lane, Yeadon, PA. He was married and had two daughters: Rose & Catherine.

The image above is from a Mecca cigarette card, owned by Luckett Davis