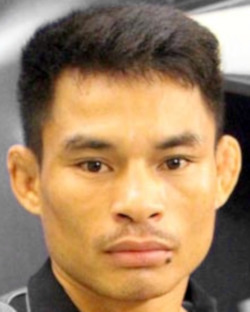 Chayaphon Moonsri; known professionally as Wanheng Menayothin or Wanheng Kaiyanghadaogym is a Thai professional boxer who has held the WBC minimumweight title since 2014.

Menayothin graduated with a Bachelor of Arts from Bangkokthonburi University. Prior to becoming a professional boxer, he was a Muay Thai fighter. He claims an unbeaten record at Lumpinee Stadium. Kaiyanghadaogym took up Muay Thai at 13 and he sustained his family with the money he earned from fighting. He went on to become a Lumpinee champion and a Thai national champion.

On November 6, 2014, Wanheng won his first world title when he defeated defending champion Oswaldo Novoa to win the WBC minimumweight title. Novoa was badly hurt by an overhand punch in the ninth round and he retired in the corner. Wanheng's promoter, Virat Vachirarattanawong, paid $175,000 dollars to host the fight, a rarely high purse for the weight class. In his sixth defense, Wanheng beat Melvin Jerusalem via unanimous decision (115–113, 114–113, 114–113). Two scorecards were swung by a point deduction Jerusalem received after he threw a clear low blow.

On May 2, 2018, Wanheng equalled Floyd Mayweather Jr's 50–0 record by knocking out Panamanian opponent Leroy Estrada in the fifth round in a mandatory title defense.

On August 29, 2018, Wanheng eclipsed Mayweather, reaching 51–0 with a points win over Pedro Taduran.