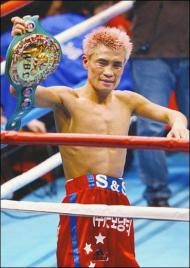 On December 25, 2007, he successfully defended the WBO Inter-Continental flyweight title with an unanimous decision victory over Heri Amol. In the 12th round, Choi was dropped with five seconds remaining, but beat the count and went on to win the fight. He collapsed while still in the ring after the bout and was rushed to the Soonchunhyang University Hospital immediately after the fight and underwent emergency brain surgery. Choi died on January 2, 2008, when he was removed from a ventilator after being pronounced brain-dead.