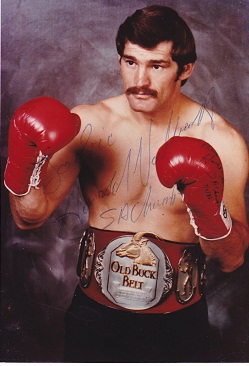 Name: Harold Volbrecht
Hometown: Boksburg, Gauteng, South Africa
Stance: Southpaw
Height: 168cm
Pro Boxer: Record
Trainer: Carlos Jacamo
Harold Volbrecht Gallery
Volbrecht was a Welterweight contender during the 1980s, unsuccessfully challenging for the WBA Welterweight title twice. Losing via knockout to Pipino Cuevas in 1980, and Mark Breland in 1987, for the vacant title. Volbrecht had initially been the mandatory challenger for then undisputed Welterweight champion Lloyd Honeyghan. Honeyghan however, refused to face Volbrecht in South Africa in protest against the apartheid regime, as mandated by the WBA, and was stripped of his title.

Volbrecht is currently a trainer in South Africa and has trained: